Enter your dates and choose from 5,014 hotels and other places to stay!

A vast country spanning most of the Arabian peninsula, Saudi Arabia is a land of ancient deserts, undulating dunes, historic ruins and the holiest of cultures. The northern region boasts the intricately rock-hewn Madain Saleh, an ancient ruin of tombs that dates back to the 1st century, while the southeastern ‘Empty Quarter’ is the one of largest deserts in the world. But Saudi Arabia’s main calling cards are Mecca and Medina, Islam’s most sacred sites. While non-Muslims are forbidden from entering these holy cities, it is a religious requirement for all physically and financially able Muslims to make the pilgrimage at least once in their lifetime. The rewards for those that do get there are substantial. The Great Mosque of Mecca is the largest in the world, and surrounds Islam’s holiest palace, the Kaaba, where up to four million people can pray at once. In addition to this, Medina’s Al-Masjid an-Nabawi mosque is said to have been built by the Prophet Muhammad himself, who was later buried here. Riyadh, Saudi Arabia’s throbbing capital, is more relaxed in its ways. Anyone can come here to enjoy a lively café culture, mud-brick palaces, and shopping options from traditional souks to extravagant malls. Meanwhile, the port city of Jeddah features a beautiful old town, a waterfront, and a string of beach resorts. You can find lots of hotels and resorts here, as well as in Riyadh and other big cities like central Buraidah and Dammam, on the east coast. Accommodation is available for Muslims only in Mecca and Medina. 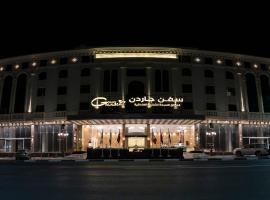 Situated within 25 km of Saiysad National Park and 31 km of Jouri Mall, Seven Garden Hotel features rooms with air conditioning and a private bathroom in Taif. The hotel was very clean and comfortable.The staff are very friendly.

Situated 6 km from Mall of Arabia in Jeddah, وردة البنفسج VIOLET ROSE offers accommodation with air conditioning and free WiFi. It is a brand new place and very clean, the staff was very helpful and were responding to my requests very quickly. It is worth spending money, I do not think that you can get two rooms apartment (suite) in this price. The kitchenette has all the basic utensils. 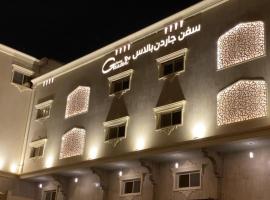 Dallah Taibah Hotel is located 50 metres away from Al Masjid Al-Nabawi, immersed in the commercial and shopping district of Medina. Love the great hospitality shown by the hotel staff. 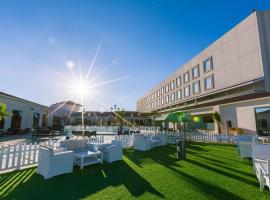 Situated in Taif, 4.1 km from Jouri Mall, Iridium Hotel features accommodation with a restaurant, free private parking, a fitness centre and a bar. The staff at hotel was amazing. Special thanks to Ms Mashael.

Located in the prestigious Abraj Al-Bait complex overlooking the Grand Mosque and Kaaba shrine, Raffles Makkah Palace boasts spacious suites with panoramic views and 24-hour personal butler service. I had difficulty in the checkin and took long time but the guy was supper nice and friendly also I hated their reservation team they drive you crazy Everything else was perfect

Set in Tabuk, 9 km from Al Raqi Mall, Swiss In Tabuk Hotel offers accommodation with a restaurant, free private parking, a fitness centre and a shared lounge. The staff are trained and courteous. 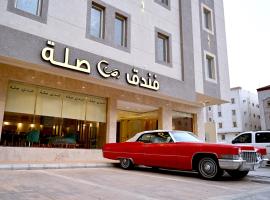 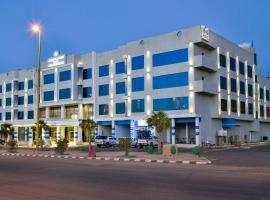 Set in the heart of Makkah, one of the world’s most inspiring holy destinations, Conrad Makkah is just steps from the Kaaba and the Holy Mosque. All excellent, staff were very courteous, polite, friendly. Room cleaning and cleanliness was very good. Dinning was excellent too. Location wise it is the best location with view. Food shops downstairs was good. Overlooking Jeddah Corniche and the Red Sea, this 5-star Hilton features 5 dining outlets, 11 flexible meeting rooms and a health club with 2 pools. Free WiFi is available in the lobby. Very nice location. Very good beakfasts. Also we had a lunch in the Safina restaurants, it was also very nice. The staff is very helpful. They provided free masks when we needed. We used swimming pool for the children, the open swimming pool. Unfortunately, due to COVID swimming pool for the women was closed. In addition, we used a beach(with additional fee for entrance and free transportation), which is actually the beach of Sheraton hotel. It is located around 30 minutes far from the hotel, when you can wear bikini and relax in the pure and clean water with beautiful fishes. Also, you can do snorkeling. The red sea mall is close to the hotel and you can do shopping if you want. 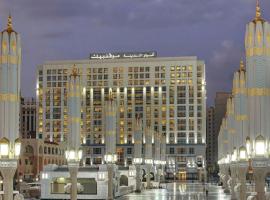 Pullman ZamZam Makkah is located just a few meters away from the Holy Mosque and offers luxurious studios and suites. It features a restaurant and views of the city and the Kaaba. Good staff,great location and comfortable stay. 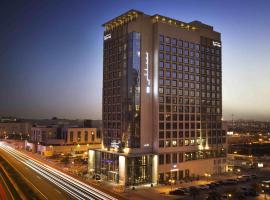 Conveniently located on Al Olaya street in Al Murooj district, the Centro Waha hotel is adjacent to the developing King Abdullah financial district with easy access to the city’s business areas. It’s quiet good for its night rate, it’s near many locations in Riyadh and serves frequent flyers for work 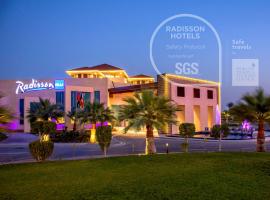 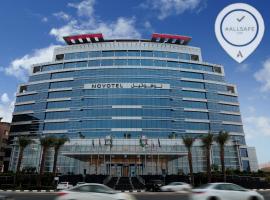 Boasting a bar, terrace and views of lake, Novotel Jazan is situated in Jazan, 2.9 km from Happy Times Theme Park. Staff and the room and the swimming pool and it’s recommended Overlooking the Granada Mall and Granada Business Park,Hilton Riyadh Hotel & Residences features 4 dining outlets and 11 flexible meeting rooms. I have in many places in riyadh but not as good as Hilton riyadh there are many point to mention it 1- location was really good and close to the mall 2- since arrival and the stuff so friendly and kind 3- rooms was really good, clean and comfortable 4- room service was really good and fast 5- as for the breakfast and buffet its the best among all the hotel as its provide wide range of food and covering all kind of tastes 6- friendly stuff in restaurant and very helpful we were requesting a lot from them but they were responding fast 7- we will go for the dinner part which was the asian restaurant LOTUS this part its full of joy and happiness as the sushi was magnificent and the stuff created special thing for me as i don’t eat salmon so they cooked for me the all the food with shrimps and changing the place of cooking so it will be far aways from fish and salmon as they knew that i have allergy. As they have there special signature desert which i never see it anywhere and its created by (chief Dino) its called the Marchmello fried Ice cream its was super deserts As the conclusion for this trip it was a pleasure to stay in this hotel and to be between all those kind people Many thanks for those people who make us happy there Lotus restaurant team 1- Suresh Ray 2- Ronni Umra 3- Osama Gamal 4- Hamza 5- Pushpa 6- Chef Dino 7- Chef Irshan 8- Abeer I really recommend this hotel for accommodation and the Lotus restaurant for dinner

فندق فيوليت الششة is situated in Makkah, 5 km from Hira Cave and 6 km from Abraj Al Bait. New hotel, comfortable, clean, bus is available to and from haram, breakfast buffet is very good and tasty.

Located in Jeddah, 3.7 km from Jeddah Mall, ibis Jeddah City Center provides accommodation with a restaurant, free private parking, a fitness centre and a bar. The Hotel is well run and the staff are courteous. This 5-star hotel is a 7-minute walk from Al Khobar’s centre. It has 2 panoramic elevators and top-class spa and dining facilities. Uninterrupted views of the Gulf and Al Khobar city are featured. The bath tub is clean & big. The bathroom is filled with clean towels & nicely scented bath & body essentials....we were also allowed to stay an hour longer than our check out time. We were also treated to a surprised champagne & chocolate cake at out room when the staff learned that we are also celebrating our wedding anniversary .

The Movenpick Jeddah offers a lagoon-style pool and a setting for outdoor dining. Located in Jeddah’s diplomatic area, it features a fitness centre with a sauna, hot tub and steam bath. Fantastic Hotel and Thanks to Ms.Noha for her kindness for upgrading my reservation. 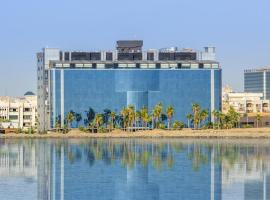 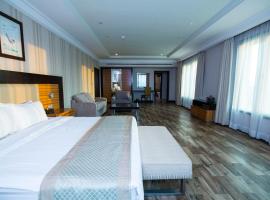 Rawda Suites Hotel located at the famous Darajja roundabout in the heart of Jeddah and very close to the main shopping malls. The breakfast was very nice its coming to my room 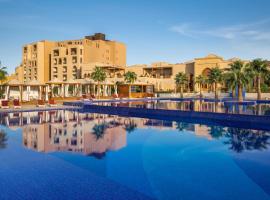 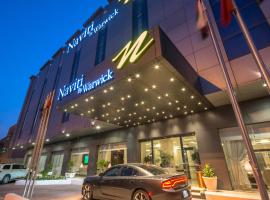 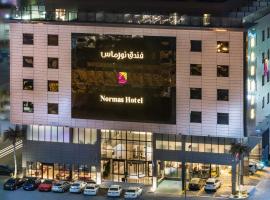 Located in Al Khobar, 4.1 km from Al Khobar Corniche, Normas Hotel provides accommodation with a restaurant, free private parking, a fitness centre and a shared lounge. It was on par with a 5 Star hotel. The front desk staff were friendly, the play area for kids was nice, the sea view was AMAZING! I loved it and I would like to stay there again.

Located in Jeddah, 7 km from Jeddah Mall, Ruve Jeddah Hotel provides accommodation with a restaurant, free private parking, an outdoor swimming pool and a fitness centre. Room was very nice and clean. Bath room also neat and clean with all the amenities available. Staff very helpful. Check in and check out was very quick and staff at both the places met with pleasing smile and service. Will recommend to all my friends and office staff. 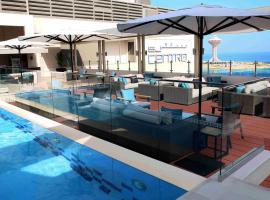 Situated in Al Khobar, 600 metres from Al Khobar Corniche, Centro Corniche Al Khobar by Rotana features accommodation with a restaurant, free private parking, an outdoor swimming pool and a terrace. It was exceptional I had great experience. Such great hotel location really well priced. Special thank you to Mr. Faisal ( The Receptionist ) you are very friendly and trustful & really helpful addressed any request or concerns within few minutes with his big smile.

Located in Jeddah, 3.7 km from Jeddah Mall, ibis Jeddah City Center provides accommodation with a restaurant, free private parking, a fitness centre and a bar. The Hotel is well run and the staff are courteous.