Hotels with Jacuzzis in Dziwnówek

Treat yourself! Relax and enjoy your stay at accommodation that comes with a jacuzzi. 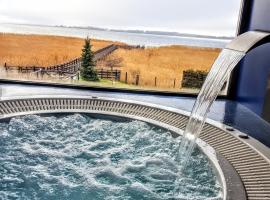 Rooms are fitted with a flat-screen TV with satellite channels. Some units feature a seating area to relax in after a busy day. Some rooms have views of the lake or garden. Rooms include a private bathroom fitted with a bath or shower. Extras include free toiletries and a hairdryer. All the rooms include a free bottle of water and fruits. The management of the hotel was so nice and friendly, they tried their best. The hotel territory is beautiful. The hotel has its own long pier, where you can walk to the pond, it was interesting for children and relaxing for adults. Amazing fragrance of lavender, cypress and thuja was felt inside the room. Together with tge cries of gulls, it was so relaxing and great. The breakfasts werealways super, 5 stars. Dinners did not offer so reach choice but also were nice ( on the buffet there were at least two different types of meat, three side dishes, soup etc). You can take bycicles for free in the hotel and for example go to the beach with it. You can use also Jacuzzi for some extra money and also a sauna in cold season. 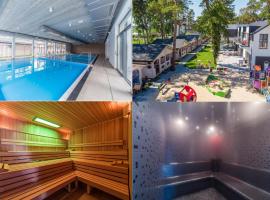 Situated in Dziwnówek, 400 metres from Dziwnówek Beach, Family-Holiday Spa&Resort features accommodation with a shared lounge, private parking, a garden and a spa and wellness centre. Boasting a kids' club, this property also provides guests with a children's playground. The resort has an indoor pool, hammam and a shared kitchen.

The wellness area at Family-Holiday Spa&Resort is comprised of a sauna and a hot tub. You can play table tennis at the accommodation. Fantastic place for families and an excellent concept of facilities available - e.g. self-service laundry service, kitchen. 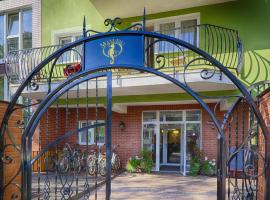 The rooms at Maximus Spa are carpeted and elegant. Each comes with a flat-screen TV as well as a balcony. A bathroom that comes with every room has a shower. Rooms are located in the main building and in a separate one which has no lift.

Maximus Spa has two indoor swimming pools, a fitness room, as well as a sauna and a hot tub. Various beauty treatments can be arranged.

Offering a barbecue and children's playground, Morze Domków Wellness & Spa is set in Dziwnówek in the West Pomerania Region. Świnoujście is 39 km away. Free WiFi is available throughout the property and free private parking is available on site. The property is fenced. atmosphere the appearance of the house cleanliness 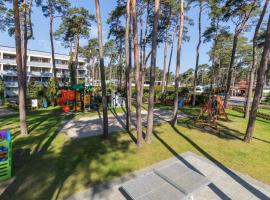 Centrum Wypoczynku i Rehabilitacji Jantar is located just 150 metres from the sea. It features a spa and wellness centre with an indoor swimming pool complex available for guests free of charge. Free Wi-Fi is available the whole resort. Close to the sea, in the center of the small town, while in quiet surroundings in pine trees park. Sauna/pool available every day and above average quality of morning and evening buffets. 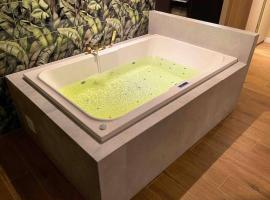 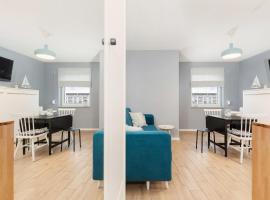 Set in Dziwnówek, Apartament Blue Dziwnówek Słoneczne Tarasy offers accommodation with a balcony and free WiFi. Boasting free private parking, the apartment is in an area where guests can engage in activities such as hiking, fishing and tennis.

The apartment has 1 bedroom, a flat-screen TV, an equipped kitchenette with a fridge and a stovetop, a washing machine, and 1 bathroom with a shower. Towels and bed linen are offered.

Looking for a hotel with hot tub?

Stepping into a hot tub and relaxing in its warm water is bliss. If you opt for a hotel with a jacuzzi, you can do this any time you like – morning, afternoon, or evening. Some hotels offer guests private hot tubs, while others have a shared jacuzzi that’s usually part of a wellness spa.
Search hotels with jacuzzis in Dziwnówek

9.3 Superb 267 reviews for hotel with jacuzzi

9.1 Superb 96 reviews for hotel with jacuzzi

10 Exceptional 1 reviews for hotel with jacuzzi